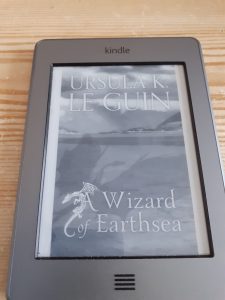 Ged is a young boy, son of a blacksmith, taught by a witch who nurtures his talent. One day he saves his village from invaders using a mist power beyond his abilities. The famous Ogion prophesies Ged to be the future greatest wizard of Earthsea, but when Ged starts his training under him he doesn’t heed his teacher’s warnings, eager as he is to learn ‘real wizardry’, to show off to friends and rivals, and so he decides, when Ogion puts the choice to him to learn at the School on Roke Island instead.

What follows is a classic fantasy, not unlike Harry Potter with wizards in a ‘school’ environment. The adult trials that follow test Ged’s wizardry, force him to face up to his greatest fear: his Shadow.

There is rich description in Wizard of Earthsea (WOE), in beasts and magic, and a well-developed character arc progressing Ged from young boy – and through his flaws – to a student. The story reaches on to Ged’s final confrontation with his Shadow, and this is where the description became too much. It did keep the authentic tone, but lost some of the interest in the location’s descriptions, and his friend’s Vetch’s importance. That being said, I would definitely recommend anyone to introduce themselves to this book for its lessons we learn from Ged on patience, and for the quality of WOE’s writing.