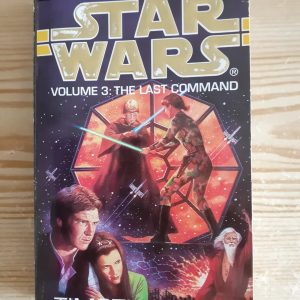 This is the series following the original three Star Wars movies, memorable as the series in it with turned-to-the-dark-side jedi master Joruus C’baoth, a jedi master described in the series as ‘insane’. C’baoth has his own plans for Luke Skywalker, Leia Organa Solo, and Mara Jade. The latter is still being spoken to by the deceased Emperor’s voice.

Meanwhile, some characters are still dealing with the aftermath of the Empire’s fall: spies, and the allegiance of the smugglers who could be vital in turning the war to New Republic (NR) or Grand Admiral Thrawn victory.

One of the most interesting parts of The Last Command (TLC) was the journey to discovering the spy in the New Republic who’s leaking information to the imperials, which prompts the reader to ask themselves who it is, or was, and how exactly it or they is/are relaying important information from the palace. The culmination to this arc is based in the midst of a siege on Coruscant that really brought home the stakes of battle with the NR in action. If it lost, it stood to lose what it had worked towards since defeating the Empire, power; and the civilians of Coruscant are threatened with the attack.

The theme of betrayal among the smugglers present in the last book was expanded on, acting as a side story with Talon Karrde, taking the reins of Han Solo (now that he’s a family man). Niles Ferrier from the previous book has returned, and the characters were well drawn out.

The final battle was brought together well, with schemes and counter-schemes. Some events can take you by surprise.

C’baoth: as a villain we see a lot of during the book series, by the end of it I was hoping for more depth to his character. He has a confidence and skill in his abilities that isn’t explained well in the series when compared to the Emperor or Luke Skywalker. He’s a weak character next to the Grand Admiral who, despite not having the force, can dupe C’baoth into most things by playing on his pride and vanity. The Grand Admiral does use force-blocking Ysalamiri creatures, however, the likelihood that they wouldn’t bump into each other when the Grand Admiral just couldn’t use them, when walking on the starships, was farfetched.

TLC is a great end to a great book series that stays true to our expectations of the original trilogy, and you can’t ask for much more than that. It’s exactly what many people feel the films didn’t do.

Link to review of previous book