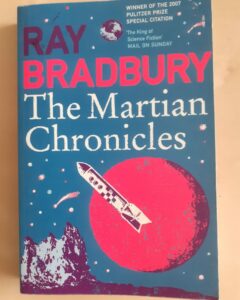 ‘Life was its own answer. Life was the propagation of more life and the living of as good a life as possible.’

‘If you can’t have the reality, a dream is just as good.’

‘Life on Earth never settled down to doing anything very good. Science ran too far ahead of us too quickly, and the people got lost in a mechanical wilderness, like children making over pretty things: gadgets, helicopters, rockets; emphasizing the wrong items, emphasizing machines instead of how to run the machines.’

The Martian Chronicles (TMCs) is a chronological series of short stories about Earth’s attempt to discover and bring about a human civilisation on Mars. The stories start with the martians, seeing how their life compares with human life; it appears old fashioned by modern standards, which is something the first expeditions to Mars also remark on. These first stories raise questions. Have humans colonised Mars in the past, in the early 20th century, without the rest of humanity being aware?

There was definitely something everyday about martian life, which mimicked human life: daily jobs, music, hunting, partnerships, and perhaps most interestingly, dreams!

Humans won’t stop sending expeditions, despite what may happen to them. The rockets keep going up. But what could go wrong, the characters think, when Mars looks like a paradise, so similar to human society. It turns out Mars is not as it appears. Without saying too much, what the humans find there appear to be their hearts’ desires. Something isn’t quite right, though.

Soon enough, the reader is confused. Where did the martians go? Why are there so few of them? More and more humans land and begin to colonise, setting up religious missions and industries. In one particular chapter I felt it hinted that the martian civilisation was still present. However, martians could not be seen by people in the way they’d expect. When people did see actual martians, it turned out they were being chased by ghosts or guided into actions or ways of thinking. There was change in how the martians appeared through TMCs, until the end when the change could be argued to be complete.

Mars starts off as a dream, and in TMCs the reader can feel like it ends as one, with human characters forgetting and having nostalgia for their lost roots, and seeing what has become of Earth, and themselves on Mars, clinging onto dreams as if they’re evaporating dust.

Whether humans have colonised Mars in TMCs, and when they did, was one of the most fascinating questions to pose in a story. I didn’t feel author Ray Bradbury gave us an answer, leaving it to our own conclusions.

TMCs is a speculative vision of a time when human society has outrun its own people on Earth, and then starts anew on Mars, hoping for a fresh start. There are morals on past Earth life and questions in the stories, some subtle. Will life really change on Mars or will it turn out just like Earth did?

I wasn’t fond of the disconnectedness of the chapters, and the characters’ ages and interactions throughout, which I found difficult to keep track of to build a cohesive picture.

TMCs definitely exceeded my expectations. It was a thoughtful collection of interrelated stories that many lovers of colonisation, space, Mars, and classic science fiction will love.