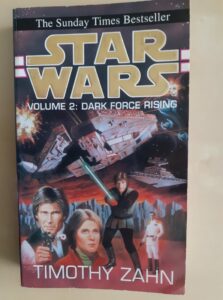 ‘She was second in command to the most powerful smuggler in the galaxy, with the kind of resources and mobility she hadn’t had since the death of the Emperor. The kind of resources that would let her find Luke Skywalker again. And kill him. Maybe then the voices would stop.’

‘This is Luke Skywalker, Jedi Knight. The guy who took down Darth Vader.’

‘Luke might have the force, and Irenez might be able to climb stairs without getting winded; but he would be heavily that he could out do both of them in sheer chicanery.’

The sequel to Heir to the Empire, Dark Force Rising (DFR), reintroduces us to our favourite classic Star Wars characters Luke Skywalker, Han Solo, Princess Leia, and Lando Calrissian in what was the book trilogy covering the events just after Return of the Jedi.

Nevertheless, years have passed. The New Republic is already being contested by ambitious politicians, threatening its divide. One fleet can make the difference between the New Republic’s stability and the Empire’s resurgence, and it just so happens DFR is about the scramble for the two hundred dreadnaughts, the ‘Katana’ or ‘Dark Force’ fleet.

Grand Admiral Thrawn is in charge of the remnants of the Empire. His humanoid form and glittering red eyes help add that menace that we need in a Star Wars villain, but it’s more the way he makes his deductions about his enemies that makes him formidable.

Princess Leia and Chewbacca’s arc on the Noghri home planet is a must read for its conclusion. They’re both among a tribe of Noghri, reptilian humanoid bodyguards with cat-like fighting skills. Leia is taking a huge risk (‘I’m taking a huge risk, Vader’) being there, knowing the Noghri’s allegiance to the Empire, especially her father Darth Vader. The Empire wants to take her children away from her, perhaps to blackmail the New Republic, but being afraid of this isn’t how diplomacy works, is it, Leia?

There is this cigarra-smoking smuggler called Niles Ferrier that the male characters keep bumping into. The first time was interesting. It kept getting more humorous and awkward every other time. I wasn’t sure if the dialogue was terrible here, but it entertained.

Thrawn didn’t feel formidable in this book. He still had the ability to surprise, but he kept getting thwarted by happenstance. The first few times, were, okay, maybe bad luck, but the next few times would have made a human grand admiral furious. His unnatural patience was what he was relying on would pay off, and I’ve got to hand it to him, he had that.

The implication behind Leia and Chewbacca’s visit on the Noghri home planet was that the Noghri were, well, tribal, content with being controlled for the sake of survival, and unable to see the bigger picture. Since this was a tribe, it read stereotypically.

I’d say DFR was much better than Heir to the Empire. There were numerous skirmishes between the characters and hostile forces, which never became boring. The rivalry between politicians in the New Republic was worth learning about. And, what they were fighting for could make the difference to either side being the victor.