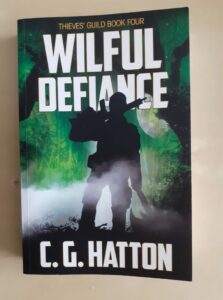 Wilful Defiance (WD) takes the Thieves Guild (TG) series in a more alien invasion direction, departing from the action spy genre, yet following on nicely from book three. There are aliens, the Bhenykhn, whose telepathic abilities are the origin of a virus that only the elite spy organisations are aware of, and the aliens aren’t going to go away, with galactic conquest top of their agenda.

Main character NG has a lot on his plate, as usual, fending off his vindictive alter ego Sebastian, balancing the emotional needs of the women in his life, unleashing his powers on aliens, and somehow managing the assemblage of the TG. The most exciting part of NG’s character is undoubtedly his place as a pawn in his superior’s machinations and of his struggle to come to terms with Sebastian. Does he lock up the latter to preserve human life to avoid inflicting pain on those he cares about or does he let him have free rein to slaughter at will?

There is also the troublesome Elliott whose loyalty to the TG is of concern, has been of concern since the start, and still is a lingering concern that NG doesn’t want to bother with tackling and trusts the answers will come soon enough. And as you could expect from books in this genre, there are a few other shady things happening in the background, organised by shady characters.

It was interesting to see how author CG Hatton tackled WD, which was on a grander scale than previous books in the series. It was about the characters and their responses to major challenges more than it was about events or battles of galactic import. Those looking for the former will be rewarded.

Most of the characters have receded into the background by WD, and retracing who’s who wasn’t easy. NG kept interest in the story, though I felt some scenes were a bit stop and start as he kept blacking out, pushing himself too hard. That being said, I thoroughly enjoyed seeing how NG would escape from being captured, or even just his fisticuffs with other characters.

We now have a better idea of the grand scheme of manipulations and of the previous events that led to the invasion. The series is still coming together, one book at a time, making us realise why what’s happening is happening. WD was a joy to read, and I never became bored. It’ll be of interest to see where author CG Hatton takes the characters next.