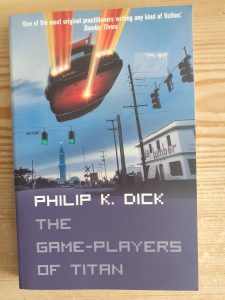 The Game-Players of Titan (TGPOT) by Philip K Dick is purportedly a story about a game (not unlike Monopoly), played by humans to acquire property deeds and match with new partners in the hope of finding the right partner who has the ‘luck’: the right combination that would allow reproduction in a world we can only assume has a dwindling population after international accidents and a war against the telepathic slug-like vugs.

Pete Garden is one such Bindman, a status of game-player/property owner, who has lost his wife Freya and his important deed Berkeley to master game-player Luckman. And Pete’s not going to let his defeat go easily; he wants a rematch and it’s a question of whether to play alongside potential new wife Carol or old hand game-player Joe Schilling who also lost to Luckman in the past and may have a motive to get even.

TGPOT was more about the vugs themselves. Some of them were police officers, and we’re made aware there is a moderate faction that co-operates with humans while the extremist faction wants humanity’s population kept low and controlled so that it can be wiped out in a potential second war. One feature of the vugs and the game itself was the ban of telepathic powers that the vugs themselves possess alongside certain humans; otherwise the game could be weighed heavily on one side.

Some of the great things about TGPOT were the flying cars, talking machines (including cars) afflicted by the Rushmore Effect that caused them to talk, but not always to co-operate with owners in the way they’d hope. It’s a world of talking elevators, and kettles, but sometimes automation gets it wrong or disagrees, causing half a bucket of inconvenience, and stress, for every one of convenience.