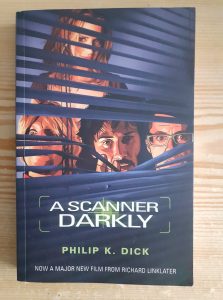 A Scanner Darkly (ASD) by Philip K Dick is a book primarily about Substance D, its effects on those who take it and on those who wish to spy on and hunt down those who trade it. Substance D is a drug that causes brain damage and hallucinations, and according to the authorities, a set of thinking that’s not lateral between the two hemispheres of the brain – a view not shared from the perspective of those who take it.

The reader didn’t have the opportunity to get a good look at Substance D – may different drugs were referenced and consumed. The way the story was angled around it was superb, bringing out the role of the different characters: the under-cover Fred/Bob Arctor wearing a special scramble suit to hide his real identity, Donna his love interest and his key to the drug’s contacts, the untrusted and wily Barris, and the special case study of Jerry Fabin. First impressions had been that the characters were without personality and there was too much paranoia, when taken literally, but keep reading and you’re in for a rewarding, thoughtful read about the damage done to people’s lives by the drug, and the authorities.