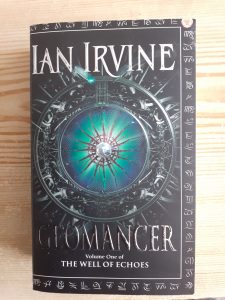 When I first read Geomancer, new to science fiction and fantasy, I got the impression it was a complex and structured fantasy novel with worldbuilding taken seriously. That impression has remained on second reading. The first way to describe it was that it was ‘creepy’, in good ways and bad ways.

On the good side of creepiness, the world of Santhenar was one populated by humans under siege by mutated feline creatures, the Lyrinx, who once came out of a void and attacked but have now evolved – or de-evolved in some cases – into formidable clans that wage war against human settlements, having the upper hand. I found the way the idea was developed was sinister, and interesting: the reader, as with the protagonists, doesn’t know exactly which secret arts are used by the enemy or how they live. There were other fascinating concepts, such as main protagonist Tiaan’s job as an artisan using crystals and finding their power source so that they can be used as energy for the war’s machine-like clankers.

On the bad side of creepiness, Tiaan was a target of jealousy for her dedication to her work, though this meant she couldn’t find a partner, which was an increasing concern in the war-time conditions they lived in where reproduction had taken on great importance. She’s often pushed or threatened into joining a ‘breeding factory’ where she would spend her life ‘doing her duty’, indentured, not being allowed outside, so that they right qualities could be put together for future generations. There were few examples of these qualities or how they were nurtured alongside what we know of the existing energy-harnessing families.

The story almost ventured into a love affair between a human and a Lyrinx at one point, which I felt was a step too far, even if it was known Tiaan was desperate to find love.

Overall, there was a lot of explaining in Geomancer, but if you persevere and can tolerate the bad creepiness and the unintentional humour of everything going wrong in every adventure for the characters, there are super interesting morally grey characters and a fantasy world that wouldn’t be far from steampunk.