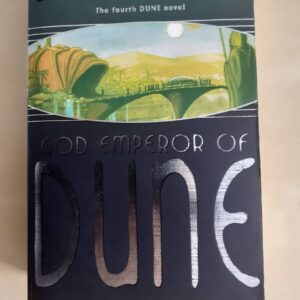 The son of Paul Atreides, Leto, had a legacy but little did we know after Children of Dune that Leto would embody a gigantic worm as part of the Golden Path for humanity. It’s a visage that alienates everyone he comes into contact with. He can’t love properly and even the beloved, loyal Duncan Idaho reviles him for being a monster.

‘Sand crunched beneath him as he rolled, flexing his body in pure animal enjoyment. He could feel his worm-self being restored, an electric sensation which sent messages of health all through him.’

The fourth Dune book is a funny one, standing out as it does in memory as being a book about the tyrant God Emperor Leto Atreides who claims to have godly powers and yet refutes them at the same time with proclamations about the miracle of the individual. In fact much of what Leto says doesn’t make sense, and he says a lot during the book. Leto meets with his dull advisor Moneo, who is Atreides with subservience that doesn’t resemble it one iota. Leto and Moneo talk about the meaning of prophecy, conspiracy, and some of the main characters, for example, this Reverend Mother Anteac and this ‘rebel’ Siona whose plans are housed within the greater machinations of Leto’s – Siona’s own father is the ever loyal Moneo.

Leto will then meet with Reverend Mother Anteac, for almost no reason at all. Or he’ll summon Duncan Idaho, his newly resurrected ghola, to his chamber. Perhaps he’ll have a few words with one or more of his conspirators about tricking Siona … The point is, when does it end? When will something happen? Well, three things happen in the whole book: three points where there is action, and all are short lived. This includes the prelude, which I felt didn’t have much significance to the emotions of the characters. The story of a legacy only took this story so far.

The only character that brings any real interest to the table is Duncan Idaho as he’s in similar, though slightly different, circumstances to previous books. Yes, he’s been resurrected as a ghola again but the problem is the last dozen Duncans have been killed and he learns he’s only really the replacement to serve as another loyal subject of Leto. It’s this Duncan brain of the past with an idealized view of male soldiery and Atreides loyalty that is now face to face with an empire defended by the female soldier Fish Speakers.

‘You choose male companions for their ability to fight and die on the side of right as you see it. You choose females who can complement this masculine view of yourself. You allow for no differences which can come from good will.’

And the Fish Speakers pose problems for Duncan. They want to mate with him in a carefree way – they even mate with themselves in a way he finds objectionable, highlighting a change towards homosexual acceptance in Leto’s new Dune (Dune or is it Arrakis or Rakis now?). You can’t blame the Fish Speakers as Leto has propounded the myth that Duncan is holy, and he’s the only man other than Leto who has this status (well, remember, Leto’s a worm now.) Leto wants Duncan to mate with Siona. Whereas Duncan appears to be a one-woman man, and to make things complicated the one he’s taken a fancy to is Leto’s bride to be, Hwi Noree.

“‘My Uncle Malky used to say that love was a bad bargain because you get no guarantees.’

‘Your Uncle Malky was a wise man.’

‘He was stupid! Love needs no guarantees.’

A smile twitched at the corners of Idaho’s mouth.

She grinned up at him. ‘You know it’s love when you want to give joy and damn the consequences.’”

‘You choose male companions for their ability to fight and die on the side of right as you see it. You

I remember the story being difficult to understand with nonsensical monologues, and there were more than a few on this read. That being said, there is a richness to the description and awareness of the Dune universe that makes even this book irresistible, a bit like the melange sand.

Not much exciting happened. By this stage the reader must be wondering, are the real events of Dune over and are we to make do with nostalgia?

I suppose it can’t be helped. If you make your main character a gigantic worm that can’t move around much, maybe the story is going to do the same. I enjoyed reading nonetheless, being a Dune universe addict, but I can’t help but think that the first three books were a lot better.