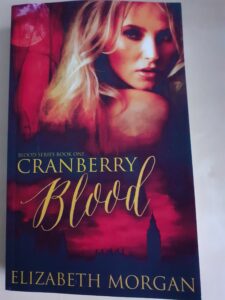 Heather is an infected Slayer

We’re not sure what this means at first for Heather, being an infected Slayer. Later we learn there is actually a whole three steps necessary to become a vampire, with temptation acting as motivation. Even so, many perish before becoming one. I really did enjoy the lore in Cranberry Blood (CB) – check out the author’s glossary.

I must say I was engrossed in the first few chapters with the action, both physical, and, ahem, sexual. There … yes, well, Heather wakes up in her home and there is this annoying guy called Brendan who’s being Brendan, and then he’s being Brendan some more, saying how he saved her and it was her clairvoyant Gran, Sofia, who told him to and that’s why he’s in Heather’s home making use of the facilities. (Hey, there’s a good story if there is a woman you want!) Heather doesn’t want to call the police though: she wants to kill him with her sword!

‘You’re not doing very well with the whole convincing me not to kill you just because you say you knew my Gran routine.’

‘Aware that I had not been stabbing and kicking his arse out of my house like I’d planned to when I first walked into the kitchen.’

I felt the dynamic between Heather and Brendan was the most important strength of CB and it made it interesting throughout. Heather kept reaching for those cranberry blood bottles, which I felt was a useful reminder of her ‘thirst’. Her and Brendan’s interactions just become funnier and funnier as they’re forced to work together:

‘Can you stop calling me kid?’ I snapped. ‘It may have escaped your attention, but I am not actually a child.’

‘He’s a walking buffet, and he doesn’t even realize it.’

I dare say I imagined Heather’s voice as the author’s own, having seen author Elizabeth Morgan’s Tiktok and Instagram videos. However, with Brendan’s point of view, it became clear the voice I imagined was only my imagination as the author can write different authentic voices. Some readers may not appreciate all the back story covering the same events from two different perspectives, but I rather liked the bigger picture.

Brendan came across as more mature and understanding than you’d expect, and Heather as less mature than you’d expect, what with her vengeful ‘slaying’. But then we know at the beginning of the story that Heather is infected with vampire blood, which perhaps has hormonal implications. Maybe Brendan’s experiences have matured him while Heather has revenge at the front of her mind? The only thing that Brendan gets riled about is being away from Heather, away from his duty to protect her, but then there were times during the story I wondered if they were getting sick of each other and it was only the ‘thirst’ and duty that kept them attached; and it was a duty Heather didn’t feel she agreed with.

CB strongly reminds me of The Twilight Saga, which I didn’t read: I only opened the books so many times 😉. There is that furry fondness feeling of being around a group of friends who all have your back. It felt a bit like Blade in the sense vampires, for all their sinister plans, were pitiful fodder for Heather’s sword. I’d have liked the vampires to have been more worthy opponents. I couldn’t help but see the parallels between Heather’s slaying and her investigations into conspiracy and the Underworld series.

Heather had already drunk human blood in the apartment block as part of her act, so her adamant avoidance of it later on in the experimental facility didn’t make sense to me, but maybe I misunderstood the point.

I wish more of the lore in the glossary had made an impact on the story itself: examples of mating rites, weddings, shifters, and the different vampire generations. Maybe I have to wait for the next books for them?

Heather and Brendan were the most interesting characters, though Sofia was important. The sub-characters didn’t interest me much and I found their names hard to remember.

CB is an exciting read front to back. I personally enjoyed the beginning more than the rest as I found the haunting background fascinating with the circumstances surrounding clairvoyant Sofia, and Heather’s bonding, and not bonding, with Brendan. After the initial sexual scenes, there wasn’t much that fazed me. I felt the author had much to offer readers in the urban fantasy genre and for anyone who generally likes vampire and werewolf books, including a sense of humour!