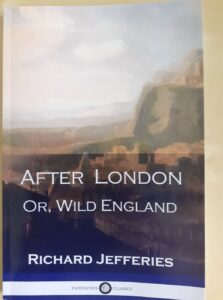 ‘If so, was it worth while to go upon so strange an enterprise for her sake? But if so, also, was life worth living, and might he not as well go and seek destruction?’

‘When the circle is once broken up it is often years before it is reformed. Often, indeed, the members of it never meet again, at least, not in the same manner, which, perhaps, they detested then, and ever afterwards regretted.’

The first few chapters were introductory discourse from the narrator, on the settings and post-apocalyptic vision of England and it can lull you into thinking the rest of the story will be likewise information heavy, concerned with naturalistic detail at a level that isn’t easy to grasp. As a result, I wasn’t certain I knew where the author was taking the story itself, or what to expect beyond a vividly explained natural world of wild England. It almost made it sound as if England was so rural and uninhabitable that no story could come of the book.

It so happened that After London or Wild England (ALOWE) resembled a historical story as the background for its speculative vision of the natural setting, peoples, and attitudes therein. I found it to be medieval in character, with Felix the main character nostalgic for the lost inventions of the greats but bemoaning the military prowess and status of knights and lords surrounding him. The latter have a much greater chance of winning the hand of his dear Aurora, after all.

It’s not all doom and gloom, and you can expect a few surprises in the plot – some which make sense and some which don’t or aren’t made clear. What is clear is that Felix wants some adventure to make him proud of himself so that he can stand out before Aurora, and on the way he may learn more about the world surrounding him: its past and its dangers.

ALOWE was an enjoyable read overall, with description that made you feel you were there and you were feeling what Felix was, as an observer of events around him more than a participant, and with ideas that ran contrary to the established order of things.

The aim was perhaps to show us the sort of society we could live in if we continue to poison the world with our society and industry, and the effect of the story itself did that, sometimes through narrative and sometimes through what I’d call an essay.