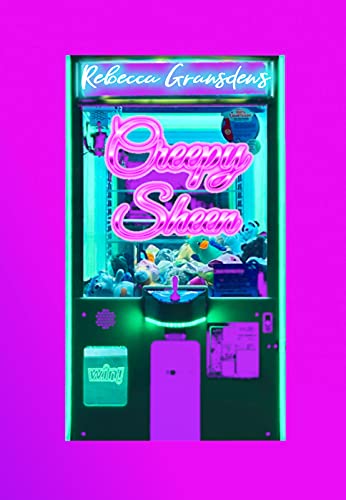 From the blurb, and not necessarily from the collection of stories itself, Creepy Sheen (CS) describes that we are living in an alternative history in the 1980s, the Third World War, which has had an impact on the broadcast transmissions making their way through space, as we’re led to believe is usual, and now there is a response aptly described in the blurb: ‘At the head of Earth’s messages to the cosmos travelled the collective broadcasts from one atomic day in history … That transmission is Creepy Sheen.’

I believed I was picking up a retro science fiction collection of stories based in the 1980s, possibly with bizarre or horror themes – just check out the cover. I assumed I knew what to expect of the time period, if only from books and media, and to some degree I was correct. Social and cultural attitudes among friends were different, and one may say more expressive or adventurous if we’re using CS as the template.

‘A perfect hiss erupts as Barney opens the drink with a shiny bottle opener. In one motion, he moves his head back, raising the bottle to take a cooling swig, an idealised silhouette against the shining white of the sign behind him.’

‘In outline they ingest the dark liquid and the brightness of the world glows, until gold turns to white and the heat of every particle lights them up in a burst of phosphorescence, the whiteness at the heart of existence tearing into their souls and remaking them anew.’

‘A distant and melodious bing bong echoed along the dusted walkways above. Starved ferns rusted, threatening to tumble and splinter under their own weight. The flatness of the mock marble seating attached to it in a warped triangle partially covered with drooping ornamental grasses, themselves in a process of steady decay.’

When a character checks her watch in the story Arcady, and not her phone, you feel an odd sense of displacement, a leaping back in time to when we had simpler gadgets, and when the desperation of life looked us in the face.

Just have a taster of the author’s choice of words: ‘And sighted a black truck … as it floated the roadway.’

There was a memorable scene in the same story mentioned above, in the arcade where the reader sees life how it is, with blinking lights and repeated tunes, but there is this disconnection and unreachable part of it that draws the character in and makes you question it. Do we live in these times? Why do we take our friends for granted? Why am I stood here in this arcade now? These questions almost make you feel that the strange circumstances that happen afterwards are the more normal ones.

With some stories I didn’t grasp the conclusion or the hidden meaning, if there was one in these ones beyond an alien-invading creepy sheen. This was the case in the stories Broken Wings, Tranquilizers at the Mall, Breakdown on a Synthesizer, and Liquid Crystal. We know something went wrong in the stories, but we’re not sure what. Despite this, the author has managed to make us easily imagine what it would be like when a crisis or two did happen in the 1980s and how the characters would respond to it.

With some stories, it took me a bit to see the link between the premise of the book and the culmination of the short story itself, such as in The Future is White and Infomercial for a Dying World. In retrospect, the way the premise was shown was excellent, saying no more than was necessary.

One of my favourite stories was Night Drive Drifter in a Bad Dream. The way this story starts! I found this story illustrated the creepy sheen premise in the most visual way, propelling the character into action and taking none of the creepiness out of the sheen, so to speak. You must read Hell Alley, also, in a story akin to Ghostbusters but with more violence, ugliness, and conspiracy than you’d imagine. I would be interested to learn what happened to the character Myra also, after her ordeal.

Overall, I’d say CS is a story that will take any expectations you had of it and slice it into pieces, leaving you with the uneasy feeling of past reminiscence, perhaps, of stepping into a world you’d thought you’d left but you’re forced to return to when on the run. It’s a collection destroyed by the realities of its … reliance on broadcast transmission, or social or cultural attitudes? I don’t say the last sentence with any certainty, but I do intend to compliment the collection as a whole in this paragraph. There is a sense of adventure or the surreal in some stories you may be familiar with from other works by Rebecca Gransden, and increasingly, there is the theme of disconnection, as we have in this collection: reaching out only to be transported to violence or a warped version of a distinctive time that advertised its rosiness but maybe hid uglier things.

As with all of Rebecca Gransden’s fiction, it’s worth your time to read!