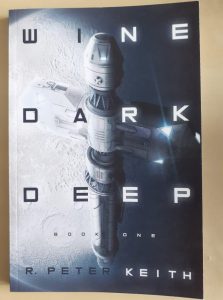 ‘Shock swept through the interplanetary spacecraft’s crew. Mission Commander Scott stared out into empty space. Empty space where refuelling tankers should have been.’

Wine Dark Deep (WDD) is a near-future space adventure based in the Solar System, so it’s close to home. Earth has reached out with its space programs and missions, likely funded by big companies, to the extent that colonisation on other planets and moons has become possible. WDD focuses on Jupiter’s moon, Ceres, at a time when Captain Cal Scott is on a standard voyage, but we’re not sure what the mission is; only that they expected to be refuelled, and weren’t!

It sounds like nothing, no big deal, at first, until you realise what this means for the crew’s survival, politically between Earth and Ceres, and for Cal Scott’s ego. The crew of Cal’s ship can speculate all they want, but in the end they need that fuel to make it home. Anything could happen at this stage, and it’s with humour and a certain amount of endearment for the character Cal Scott and those who interact with him that it did happen.

I loved Cal’s quick-thinking in times of crisis. He wasn’t as confident as I expected him to be, but he was bold and prepared to do what it took, even if went alone. I liked the combination between rich description of Ceres and lighthearted characterisation – putting aside character psychologist and Cal Scott’s old ‘friend’ Helen Donovan’s ambitions.

Description-wise, there was a lot of regolith, and I like regolith!

The chapters were varying lengths. We’d get going, and then we’d stop for a chapter or two, and so on. Perhaps there could have been more about Cal and his crew, and the same for Helen and her Ceres’ cohorts, as in my mind they were jumbled.

WDD was better than I thought it was going to be, having received it as a gift rather than a recommendation. Thought had gone into its creation, and I felt that the joy the author had put into the writing and the care with its presentation led to an entertaining and speculative read.