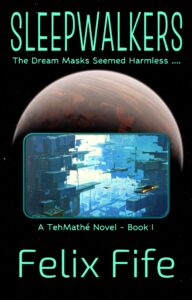 Sleepwalkers by Felix Fife is a strongly relatable book, using masks to describe the way people in our world interact, motivated by deals, the latest technologies, and algorithms, while missing out on all the real right beside them, ignoring proper meals just to get ahead in the game without realising the world may be crumbling around them. Masks themselves were aptly used as an idea in Sleepwalkers: masking behaviour online to deny culpability in real life by engaging in virtual reality. People don’t need to act like their true selves because they can be anyone they want, giving them a façade, distorting perceptions of what’s real.

I became attached to the characters in Sleepwalkers and the rhythm of life in what-isn’t-exactly-an-everyday-bar in a quasi-futuristic setting where visitors come in with masks all the time, only talking about masks, and Kyro the bartender and chef isn’t interested, fighting a one-man cause against the world. Slowly, the worldbuilding, environment, and bigger picture unravels without being overwhelming – an error many debut science fiction novelists make.

I was interested where the author was taking Sleepwalkers. It went in revolutions, from the centre, building greater description and complexity with each new chapter, as if the author was unearthing the story. There was something subtle at play. I knew I wanted something drastic to happen to Kyro’s life, for the sake of reader enjoyment, and I wanted to know, when it did happen, whether this was going to be subtle or terrible.

I was confused about the terraces at first but, eventually, I was able to picture them; more description may have helped. Life’s rhythm is nice in the bar, however, sometimes it was repetitive, with Kyro fending off peer pressure about the masks, cooking a meal with Ayla’s help, experiencing the wolf maskers. I’d have preferred more POV action or a bumpier or faster pace in more scenes.

The dialogue was stiff, monotone. It worked for Kyro who was just doing his job and didn’t care any more about what others thought, but maybe didn’t work as well for his dialogue with everyone else. In long scenes, I was almost praying for a scene break.

Sleepwalkers had an intriguing premise, and was more than just an action-oriented page turner. From the blurb and the beginning more than just a sci-fi is promised. Did it deliver? Situations escalated. There were setbacks, and character growth. Worldbuilding expanded during the story’s course. The beginning captures reader interest, and it improves from there. What Sleepwalkers did deliver was a low-profile environment, a world in miniature, a bar that was a window into the world and its circumstances and struggles. And it delivered a rigid character, Kyro, who had to learn loosen up. It didn’t build momentum, and there wasn’t great synergy between the characters’ dialogue or sub characters. There was an innocent love interest going on between Kyro and his new chef Ayla, and this was interesting because it involved maskless Kyro and tested courage that we’d have expected him to already possess.

Sleepwalkers had a careful writing style, which was relatable and gave grounds for building the story and characters. But … read the last chapter and you’ll see immediately that author Felix Fife can do even better!

Sleepwalkers on Amazon US